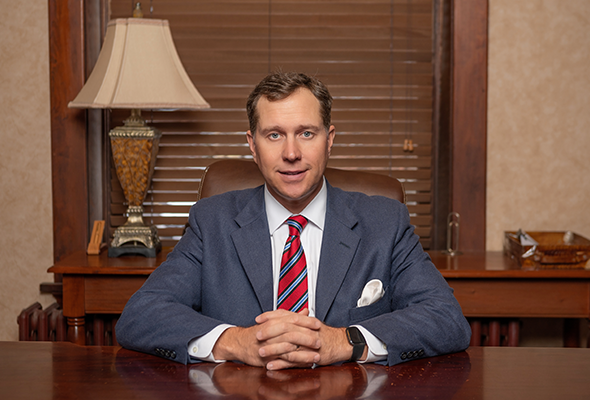 Attorney Martin E. Hubbell has practiced law in Southwest Ohio since 2001. With a diverse practice, Marty represents clients in a range of legal matters, including domestic relations, personal injury, criminal defense, and civil litigation. As legal problems may often encompass many different fields of law, his general practice of law gives him unique insight into complicated cases. He has handled hundreds of cases over the course of his career, focusing on getting the best possible outcome for his clients.

Marty has been recognized by The National Trial Lawyers Association as one of Ohio’s Top 40 Under 40 attorneys. In 2011, he was named a Rising Star by Super Lawyers, selected through peer nomination and evaluation. Since, he has received multiple recognitions from Super Lawyers, including the last four years in a row.

In addition to his attorney work, Marty also has extensive judicial experience. He has worked as a part-time Magistrate for the City of Lebanon since 2003 and as an Acting Judge in the Lebanon Municipal Court since 2010. Marty is active in the Warren County Bar Association, serving on the Certified Grievance Committee, the Scholarship Committee, and assisting with the annual golf outing.

Marty is active in the community, and resides in Lebanon.  He is the President-elect for the Board of Trustees of Warren County Community Services, Inc., Warren County’s largest non-profit organization.  He also sits on the Board for the Lebanon Area Chamber of Commerce, and has previously served on the Board for the First Tee of Greater Miami Valley.  Marty recently joined Lebanon Rotary.

Born and raised in Waynesville, Ohio, Marty graduated from the University of Texas at Austin in 1997 before obtaining his law degree from the University of Dayton School of Law in 2001. As a law student, he participated in an international law moot court competition in Chicago, Illinois, demonstrating an early mastery of skills that have helped him successfully represent clients in his legal practice.  He is licensed to practice in all Ohio State courts and in the United States District Court for the Southern District of Ohio.

In addition to his skill as a litigator, Marty is an accomplished athlete. He was a four-time Ohio State swimming champion for Waynesville High School.  At the University of Texas, he was a twelve-time All-American and a captain of Texas’ 1996 NCAA Champion swimming team. Marty represented the United States at the 1994 Goodwill Games in St. Petersburg, Russia, and is a proud member of the United States National Team Alumni.